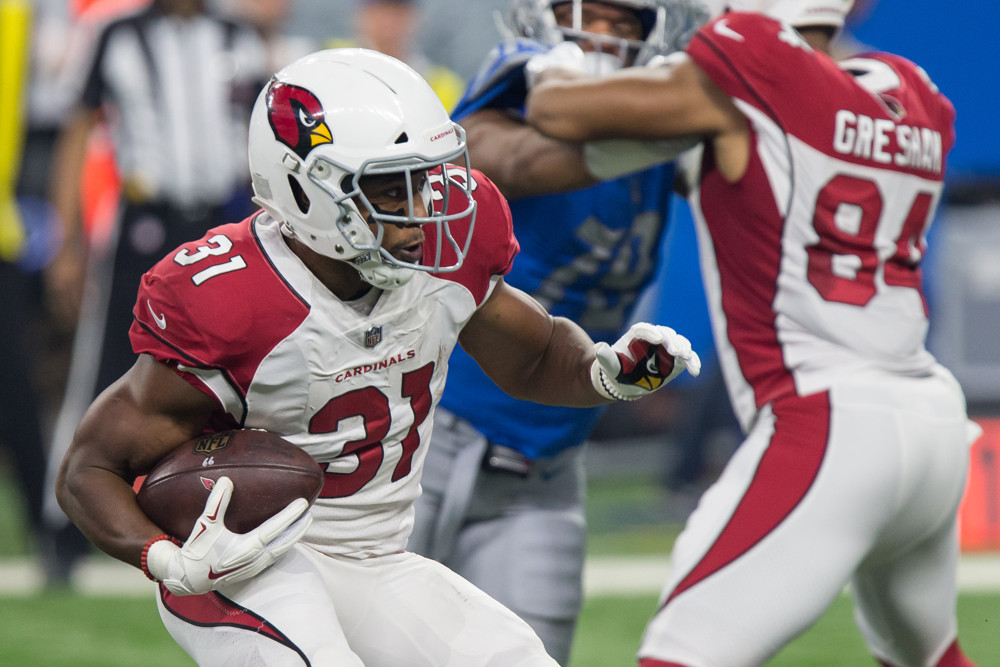 With the first week of NFL action in the books, many fantasy teams will be making their first trip to the waiver wire. This weekend’s action included a variety of injuries, including some to the league’s biggest superstars. With week 2 quickly approaching, here is what you need to know about this week’s injuries.

The most significant injury for fantasy purposes, David Johnson suffered what Bruce Arians called a “wrist dislocation” midway through Sunday’s game. Early in the week Johnson sought a second opinion on the wrist, but Adam Schefter reported Tuesday morning that Johnson will undergo surgery. Johnson will be placed on injured reserve and is looking at a 2-3 month recovery according to Schefter. His earliest return date would be week 10, but there is no guarantee Johnson returns this season. This will be a situation to monitor throughout the season.

One of the most significant injuries of the weekend, Jacksonville’s Allen Robinson suffered a torn ACL early in Sunday’s game. This injury will end Robinson’s season, but should give him enough time to be ready for week 1 next year. The injury could not have come at a worse time for Robinson, who is in a contract year.

Coming into the Sunday night game as questionable, Odell Beckham Jr ended up inactive for week 1 with the ankle sprain he suffered in the preseason. According to Ian Rapoport, Beckham is fully expected to make his season debut in week 2. Beckham will likely be limited throughout the week, but he appears on track to play this week.

In Sunday’s loss to Atlanta, the Bears suffered another blow to their decimated receiving corps. Kevin White suffered a fractured scapula, and was subsequently placed on injured reserve. This injury will end White’s season, his third consecutive season on injured reserve. Playing in only five games his first three seasons, he is not a lock to make the Bears roster going forward.

After practicing in full before week 1, the Seahawks held out Thomas Rawls as a precaution. After initially injuring his ankle in the preseason, Rawls should be all systems go for week 2. Coach Pete Carroll noted, “We do expect him back. He should be raring to go.” Barring a setback, Rawls should immediately step in and compete for carries this weekend.

After struggling through a hamstring injury for a majority of the preseason, Danny Woodhead aggravated his hamstring in the first quarter of Sunday’s game. Ian Rapoport reported that Woodhead is expected to miss 4-6 weeks. The Ravens may decide to place Woodhead on injured reserve, which would cost him 8 weeks, but open a roster spot. Owners should expect to be without Woodhead for the next month at least.

Andrew Luck has yet to practice in 2017, and has already been ruled out for week 2 after undergoing offseason shoulder surgery. When asked about Luck, coach Chuck Pagano said they still don’t have a set date on when Luck will play. He also mentioned he did not know if Luck will practice this week. While Luck was kept of the physically unable to perform list to start the season, it is looking more likely that his absence will extend well into the regular season.

After suffering a sprained knee in the Bengals final preseason game, John Ross appeared on Cincinnati’s injury report as questionable before sitting out of week 1. He only practiced on a limited basis last week, but got in a full session this Tuesday. Initially thought to be targeting a week 3 return, Ross is looking more likely to suit up for this Thursday’s game. Even if he does make his regular season debut, look for the Bengals to limit his snaps as he recovers.

Texans’ tight end CJ Fiedorowicz suffered his second concussion of the year in Sunday’s loss to the Jaguars. The Texans consequently placed Fiedorowicz on injured reserve, costing him at least half of the season. Head injuries are often difficult to evaluate, and Fiedorowicz should be considered questionable to return this season.

Suffering a concussion in the 4th quarter of Thursday’s game, Danny Amendola was quickly ruled out for the rest of the game. While Amendola has ten days to get cleared for this weekend’s matchup, he also has a history of concussions. At this time, Amendola is highly questionable for week 2 and should be considered week-to-week.