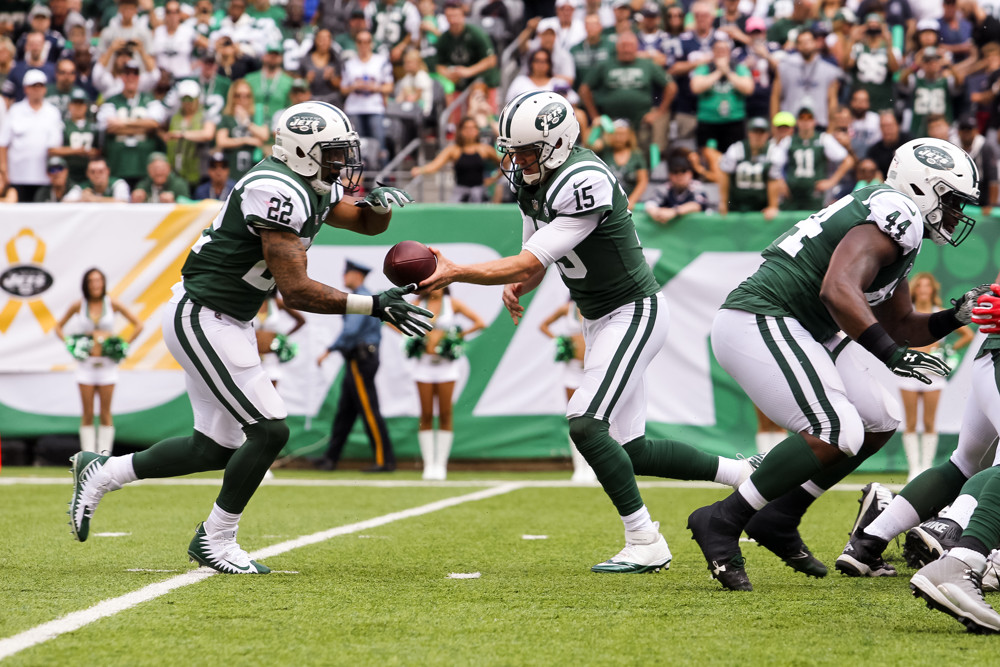 Week 9 is in the books and boy was it a weird one. There weren't a lot of injuries (Dez Bryant and Eddie Lacy are two that do come to mind), but there sure were a lot of fights. AJ Green, Mike Evans, and Carlos Hyde were all ejected, although as of now it looks like only Evans will see a suspension. With fantasy football playoffs just around the corner, here are some players worth looking at to solidify your bench for the playoff run.

Matt Forte has been undervalued again this season, being owned in less than half of fantasy football leagues. But yet the 31 year old continues getting a large share of the carries. In Week 9 Forte rushed 14 times for 77 yards and 2 touchdowns. He also caught 4 of 4 targets for 19 yards. Forte may be more worthwhile in PPR leagues, but he is worth owning nonetheless. The Jets get TB in Week 10 and have a rather nice schedule in the last few weeks of the season (vs LAC and @ NE). He should be owned in 10 team leagues.

Another criminally undervalued player, Robert Woods has been listed on this column before. But now he is just getting too good to ignore. Still only owned in 1/3 of leagues, Woods had another nice week in Week 9, catching 4 of 5 targets for 70 yards and 2 touchdowns. He is averaging 6 targets a game, which may seem low, but with Jared Goff starting to get hot, we can only imagine Woods will see some of the benefits. Woods should be added in 12 team leagues, especially with games against Houston, Philadelphia, Tennessee, and San Francisco left to be played.

Terrance Williams lit up the Kansas City Defense in Week 9, catching 9 of 9 targets for 141 yards. Williams has never been super prominent in the Cowboys' offense, but with Dez Bryant going down with an ankle injury (and not returning), Terrance Williams could be a very solid fantasy player for the time being. Zeke will most likely start his suspension (but who really knows at this pointit may not start until the 2043 season at this rate) in Week 10, meaning Dak may have to start throwing a little more often. Watch for any Dez news to come out early this week. If he is to miss time, Williams becomes a must add in all leagues. If Dez is ok, Williams is more of a 12-14 team league addition.

Note: Williams seemed to tweak his knee at the end of the game, but probably didn't return since the game was so out of hand. Just watch for news before you spend anything on him.

Well, I really don't want to be back on this wild ride, but it appears an Eddie Lacy injury has forced us to ride it once again. Thomas Rawls entered Week 9 after Lacy went down and went on to rush 9 times for 39 yards. He caught 2 passes for 31 yards as well. With Lacy leaving early and not returning, it looks like Rawls will get another chance to lead this backfield. The Seahawks added Duane Brown, a pro bowl LT, last week and it should help the running game a bit. As for now however, Rawls can be added in 12 team leagues as long as Eddie Lacy misses a few weeks.

Time shares are always scary, but this one seems to be working so far. In Week 9 against the Raiders, Damien Williams rushed 7 times for 14 yards (ew) but caught 6 passes for 47 yards and 1 touchdown. Kenyan Drake rushed 9 times for 69 yards (ah better) and caught 6 passes for 35 yards. Both backs were heavily utilized, but Drake had a far better day on the ground. If he can match Williams through the air and outgain him on the ground, he could easily take a lion's share of the touches in Miami. At this point, Drake and Williams are worth adding in 12 team leagues since they both get the same amount of work and are valuable in PPR leagues. If Drake continues to run better, he may be worth a shot in 10 team leagues.

With the surprising news of Pierre Garcon being put on the IR, Marquise Goodwin became a very intriguing player to pick up last week. Unfortunately even with the volume being there, Goodwin only managed to catch 2 passes for 68 yards. He did have 8 targets however, which goes to show that he is the main target after Garcon. It's hard to say how the offense will look each week, but he is a decent addition to fill in for Bye weeks or injuries.

Remember when the Denver Defense was elite? I sure do. (since it was literally last year!) Unfortunately you can't blame them when the offense is so terrible that they can't stay on the field. But I digress. It may have been game flow. It may have been luck. Or maybe Corey Clement is actually a good RB and the Eagle's management is starting to see that. Clement led the team in rushes (12), gaining 51 yards and scoring 2 touchdowns. He also caught a 15 yard td pass. The last two weeks Clement has touched the ball at least 10 times. Many of you may be afraid of the Jay Ajayi usage, but Clement is just too good to bench. He is worth adding in deeper leagues and may become the 2nd back in Philly.

Not much to say here. Greg Olsen is a top 5 TE when healthy, and Carolina desperately needs their top receiver. He is going to get a ton of targets now that Kelvin Benjamin is gone. He probably won't be back in Week 10 (Week 11 is a Bye). But if you have an IR spot or bench spot, Olsen should be added to your team to prepare for the playoffs.