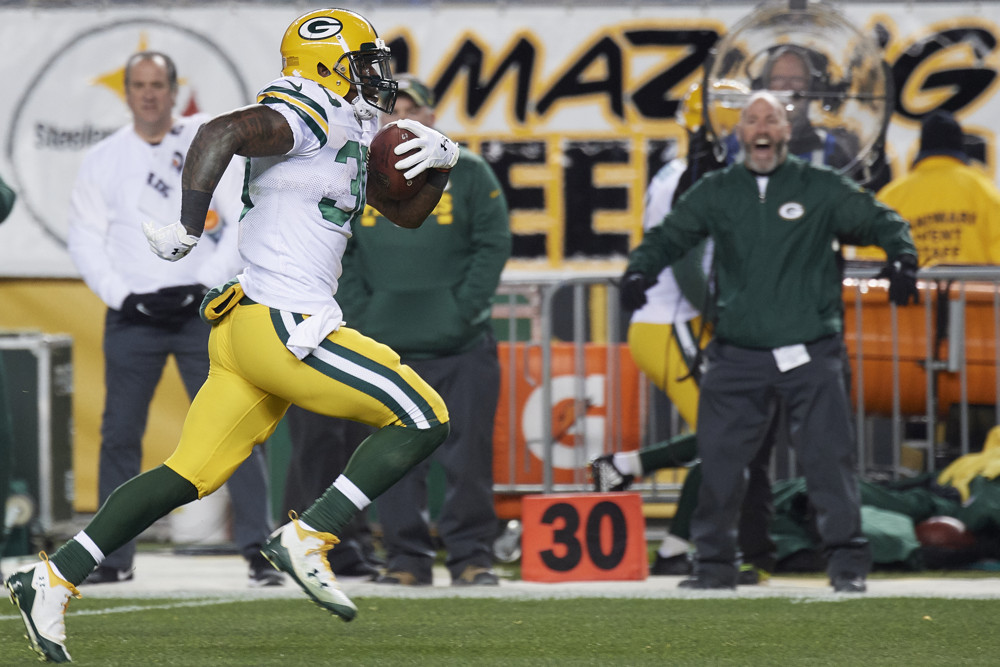 Depending on your league, you have 1-2 more weeks of regular season before the fantasy playoffs begin. You might have already clinched a playoff berth, or maybe you are fighting for your season. There are still plenty of waiver wire options out there that could either help solidify your playoff-bound team, or be the reason why you even make the playoffs. Here are some players to look at for Week 13.

Owned in just over half of leagues, Kenyan Drake has now taken over the backfield after Damien Williams went down in Week 12 to a severe looking shoulder injury. Drake rushed 9 times for 20 yards, and caught 3 passes for 27 yards and 1 touchdown. Drake has been decent, especially in PPR leagues as of late, and should be added in 10 team leagues based on volume alone.

A lot of people stayed away from Jamaal Williams after putting up some poor performances as the starter. The last 3 games however Williams has been a true workhorse, carrying an average of 20 times in each game. In Week 12, Williams rushed 21 times for 66 yards and 1 touchdown. He also caught 4 passes for 69 yards and another touchdown. Now Williams isn't necessarily running well, but he is getting the ball so much it is hard to ignore. Williams gets Tampa Bay and Cleveland next, meaning he could continue to grind it out in the run game. If he gets used in the pass game as well, he is a solid flex option. Williams should be owned in 10 team leagues, mostly based on volume for now.

Jacquizz Rodgers saw the majority of the carries after Doug Martin exited Week 12's loss to the Falcons due to a concussion. Rodgers rushed 8 times for 31 yards and caught one pass for 6 yards. The Buccaneers were playing from behind the whole game, so they had to abandon the run game rather early. If Martin can't go in Week 13 against the Packers, Rodgers looks like a solid streaming option. He should be added in 12 team leagues if you need a spot start.

Another back owned in half of leagues, Rex Burkhead has had his up and downs since returning from an injury in Week 7. In Week 12, Burkhead rushed 13 times for 50 yards and 1 touchdown, and caught 2 passes for 3 yards and 1 touchdown. It seems as though he is firmly cemented into the Patriots' offense, but it will always be difficult to tell which Patriots' running back will get the chances from week to week. Burkhead gets the Bills twice in the coming weeks, who, before shutting down Kansas City last week, had allowed a ton of yards and touchdowns to running backs. Burkhead can be added in 12 team leagues as a decent flex option.

Cooper Kupp eclipsed the 100 yard mark for the first time in his career in Week 12, catching 8 of 11 targets for 116 yards. Kupp is no stranger to targets in the Rams' offense, but it appears the loss of Robert Woods was enough to push him into fantasy relevance. The rookie receiver now has 72 targets for the season, and it doesn't appear that QB Jared Goff is slowing down anytime soon. This offense is playing well, so Kupp should continue to see a ton of targets. The Rams don't have the easiest schedule (@ARI, PHI, @ SEA) the next few weeks, but Sammy Watkins should see the best CBs, leaving Kupp open for some big games. He should be added in 12 team leagues.

If you were anything like me last week, you were shouting who?! after seeing who caught another touchdown pass. Apparently Week 11 wasn't a fluke. Ricky Seals-Jones caught 4 of 6 targets for 72 yards and 1 touchdown in Week 12 against the Jaguars. Not only did Seals-Jones continue his coming out party, but he did it against the best defense in the league. I guess Blaine Gabbert really likes this TE, and he may be worth a shot if you are in need of a TE this week. The Cardinals take on the Rams, so it might not be a super easy matchup for Seals-Jones, but he just did it against Jacksonville so who knows.

Since coming to Chicago in Week 10, Dontrelle Inman has quickly become the #1 receiver in the Bears' offense. In the past three weeks, Inman has been targeted 22 times. In Week 12, Inman caught 4 of 9 targets for 64 yards. This may not seem all that impressive, but it shows that rookie QB Mitch Trubisky likes the ex-Charger WR. As Trubisky grows in the NFL, Inman should continue seeing more opportunity. He can be added in 14 team leagues.

It appears as though T.J. Yeldon finally found his niche in Jacksonville as the passing down running back. He caught 5 of 6 targets for 42 yards in Week 12's loss to the Cardinals. He did carry the ball 3 times for 10 yards as well. At this point, Yeldon seems to be a solid handcuff to Leonard Fournette, especially since Fournette has been nursing an ankle injury for the past few weeks. If Fournette is held out at any point, Yeldon becomes a solid RB2 due to volume. He should be owned in 14 team leagues, and probably by any Fournette owners.