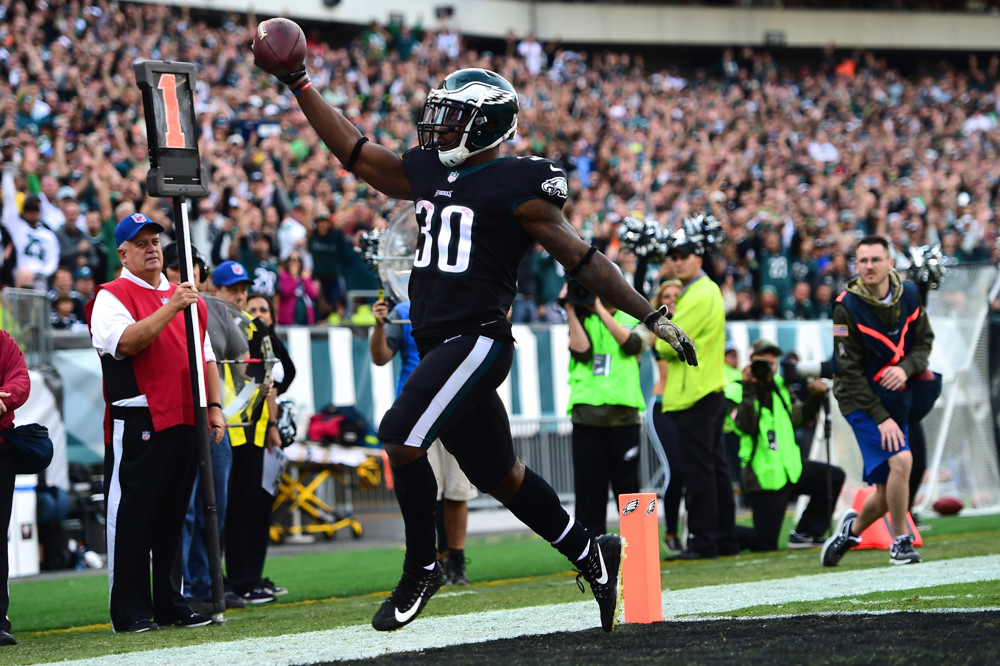 You may not think there is much of a difference between a full PPR and a half PPR draft, but you'd be surprised in how much more running backs are valued in half PPR than the wide receivers. Since players don't get as many points for receiving, you might have to rely on non-receiving running backs a little more often than you would in a full PPR.

This offseason we've been primarily studying PPR rankings, but today we are going to take a look at some half PPR running back sleepers. For those of you who have those last minute drafts, grabbing a sleeper in 12-14 team leagues may be what you need to make it through the season on your way to a championship.

We will base this on our 12 team half PPR ADP, looking at players drafted in the double digit rounds or later.

Corey Clement had a surprisingly nice rookie season, but he didn't really show his athleticism until the postseason. Clement caught 10 passes for 139 yards and one touchdown in the Eagles' Super Bowl run. His biggest game came in the biggest game in football, catching four passes for 100 yards and one touchdown. He made highlight reel plays, wowing football fans everywhere.

Clement is currently being drafted in the middle of the 10th round (10.07) as the 45th running back off the board.

Clement is being considered a sleeper because he is next in line behind RB Jay Ajayi, who has had issues with injuries in the past. Besides that, the Eagles will probably be scrambling without WR Alshon Jeffery and QB Carson Wentz, so Clement may be more involved to start the season. Clement can both run and catch, making him a nice fantasy asset should Ajayi go down. Even if he doesn't, Clement has shown he can handle passing down situations.

Latavius Murray is another running back that would benefit greatly from an injury to the starter: Dalvin Cook. Now we can't predict nor want someone to get injured, but if Cook were to go down, Murray would be in for a huge amount of work. Murray also looked great in the preseason, running hard and bursting through the line.

Murray may not be the starter, but he should get plenty of carries in order to give Cook a rest. The Vikings probably don't want to rush their star player back from an ACL injury too quickly. Murray should get plenty of rushing attempts, and also has shown he can catch the ball (41 catches and 33 catches in 2015 and 2016), making him a nice addition to half PPR teams.

Bilal Powell has been a decent running back for the New York Jets, playing seven years as a RB/WR/FB. In the last two years as a RB for the Jets, he has rushed for over 700 yards. He also can catch, as shown by his 47 and 58 receptions in 2015 and 2016. Even his yards per carry are solid, averaging 4.4 ypc over his seven year career.

Powell isn't getting much love in fantasy drafts, going mid-11th round (11.05) as the 49th running back off the board.

Even with RB Isaiah Crowell joining the team, it appears as though Powell will get the first crack at starting duties. The 11th round for a starting RB who has a rookie QB could be a huge steal. If Sam Darnold needs a safety net, look for Powell to get a nice amount of targets.

Alfred Morris as a sleeper is a product of an unfortunate injury that happened this past Saturday. RB Jerick McKinnon went down with an ACL tear during practice. Fantasy owners who already drafted have already rushed to the waiver wire to grab either RB Matt Breida or Morris. What some fantasy owners might not realize is that it is more likely that Morris will take McKinnon's role and that Breida will keep the role he was supposed to have. That means Alf will probably start.

Morris is currently being drafted in the back of the 11th round (11.11) as the 50th running back off the board.

So why Morris? Well Morris was signed this offseason by San Francisco, reuniting him with former Redskin's coach Kyle Shanahan. According to the Washington Times, Morris had two of his best years under Shanahan, rushing for 1613 yards in 2012 and 1275 yards in 2013. Now that was five years ago, but Morris is only 29 and still has gas in the tank. He could easily be one of the biggest steals in this draft.

With our last sleeper, we are going to go super deep. Rookie RB Boston Scott seemingly got the nod to spell RB Alvin Kamara to start the season. This came after a surprising cut of RB Jonathan Williams, who seemed to have a good preseason and was going to play the Mark Ingram role.

Boston Scott, a running back drafted in the sixth round of the NFL draft, is currently undrafted in 12-team half PPR drafts.

Scott should see a lot of work in the first four weeks of the season, but probably will fall off the radar once Mark Ingram returns. If you are in dire straits, Scott would be a nice grab for a solid running back in bigger leagues. If Ingram or Kamara would go down at some point, Scott would be in line for a lot of work.