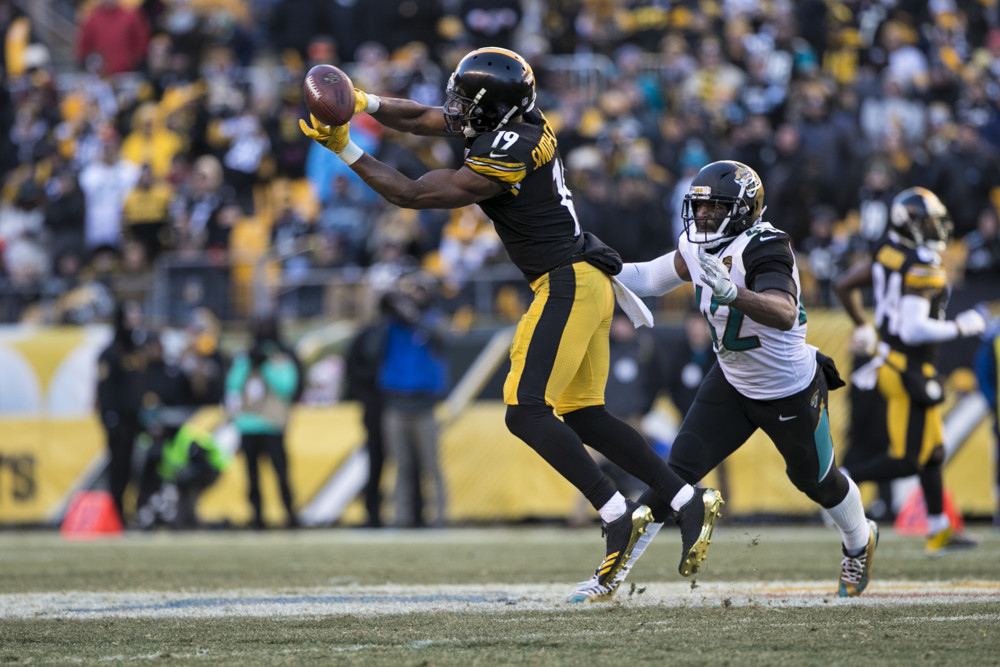 Wide receivers seem pretty deep this 2018 pre-season, which means there are plenty of players who will not perform to their ADP. The wide receiver position saw plenty of busts last year, including players like OBJ (injury), Jordy Nelson (QB injury), and Dez Bryant (poor play).

Whether it's something hard to predict like injuries, or maybe something you can see coming like a bad offense or old age, numerous wide receivers will bust in 2018.

We will take a look at some mid-round WRs that have a higher bust potential than others this coming fantasy season.

JuJu Smith-Schuster came out of nowhere in 2017, catching 58 passes on 79 targets for 917 yards and seven touchdowns. He is fast, shifty, and has the ability to catch long TD passes.

He is currently being drafted pretty high, going in the beginning of the fourth round as the 18th WR off the board. He is actually being drafted higher than many WR1 of NFL teams.

Now JuJu is interesting, but fantasy owners are reaching just a bit for the second WR on a team dominated by WR Antonio Brown and RB Lev Bell. The Steelers also added deep threat James Washington, meaning the ball will be spread around even more. JuJu played 14 games last year, but only had 79 targets. That's fewer targets than Eric Decker, Adam Humphries, Paul Richardson.you see where I'm going with this.

JuJu made the most of his targets in 2017, but can he repeat that with similar amounts in 2018? At a fourth round draft capital, it may be hard for JuJu to live up to that ADP.

Going right behind JuJu Smith-Schuster in drafts, Demaryius Thomas is currently being drafted at the 4.08 spot as the 19th WR off the board. Thomas has been one of the best receivers in the NFL in past years, but recently has been slowing down.

Thomas is now 30 years old, has a new QB, and has more and more competition for targets with WR Courtland Sutton and TE Jake Butt coming into the offense. It's also a bit unsure how new QB Case Keenum will do. Keenum had a breakout year last year for the Vikings, but in 5 previous seasons never cracked the starting roster.

I wouldn't be surprised if Thomas finished as a WR3 instead of a WR2 (where he currently is being taken in drafts).

I will probably catch some serious hate for this one, but Josh Gordon is another fourth round WR with a high potential to bust in 2018. First off, I want to say that I want Flash Gordon to succeed just as much as anyone else does. But that doesn't mean he won't bust. Currently, Gordon is being taken at the back of the fourth round as the 21st WR off the board.

Obviously the first main reason he could be a bust is the risk he has for breaking the NFL's policies. He already has been in the news lately, although the real story is a bit unknown. His last full season was in 2013. He only played five games in 2014 and 2017, and missed 2015 and 2016 entirely.

In the five games he did play last year, he caught 18 passes on 42 targets for 335 yards and one touchdown. Now he came back to the NFL late and probably didn't have much rapport with QB Deshone Kizer, but he still didn't seem like his old self quite yet.

This year the Browns added a ton of fire power to their offense. They added WR Jarvis Landry (a PPR target hog), RB Carlos Hyde (solid pass catching back) and QB Tyrod Taylor (running QB). If Gordon does play, he will have to share the targets. The fact that the Taylor likes to run also lessens his target potential.

We are all hoping for a great story with Gordon, but WR2 ADP might not be attainable.

Allen Robinson missed all of 2017 with a torn ACL, but he is looking to bounce back with a new team. Robinson looks like the de facto WR1 in Chicago, which of course is very intriguing for fantasy owners.

Robinson is currently going in the fifth round as the 23rd WR off the board. You might not think that this is too high, but Robinson has only had one great year in his four year career. In 2015 he caught 80 passes for 1400 yards and an unheard of 14 touchdowns. The other two years he failed to reach 900 yards and scored only two (2014) and six (2016) touchdowns.

Now Robinson is coming off an ACL tear, playing in a new system, and being thrown to by an inconsistent QB Mitch Trubisky. Being drafted as a WR2 might be a bit too high for a guy who had one good season and is basically being taken as a potential lottery ticket since we have no idea how he will perform. The Bears have been awful offensively for years, and that may drag Robinson right down with them.

If you are a believer in regression, you will probably see why Will Fuller is on this list. First off, he only caught 28 passes for 423 yards in 10 games last year. The reason he is going in the sixth round (WR 31) is probably because he caught an insane amount of touchdowns with QB Deshaun Watson. In the 4 games Fuller played with Watson, he caught seven touchdowns. It got to a point where no one would believe Fuller would do it again, just to watch him score two more times.

Unfortunately both Watson and Fuller may regress in the amount of touchdowns they will be scoring in 2018. What Watson did was amazing, but it is too risky to assume he will do the same thing again. To add to that, Watson didn't necessarily target Fuller all that much. Fuller really only had great fantasy weeks thanks to all the touchdowns.

If Fuller doesn't get the touchdowns like he did in 2017, fantasy owners will be very disappointed in this pick.