Wentz and Palmer Battle for Carson Superiority in Eagles versus Cardinals 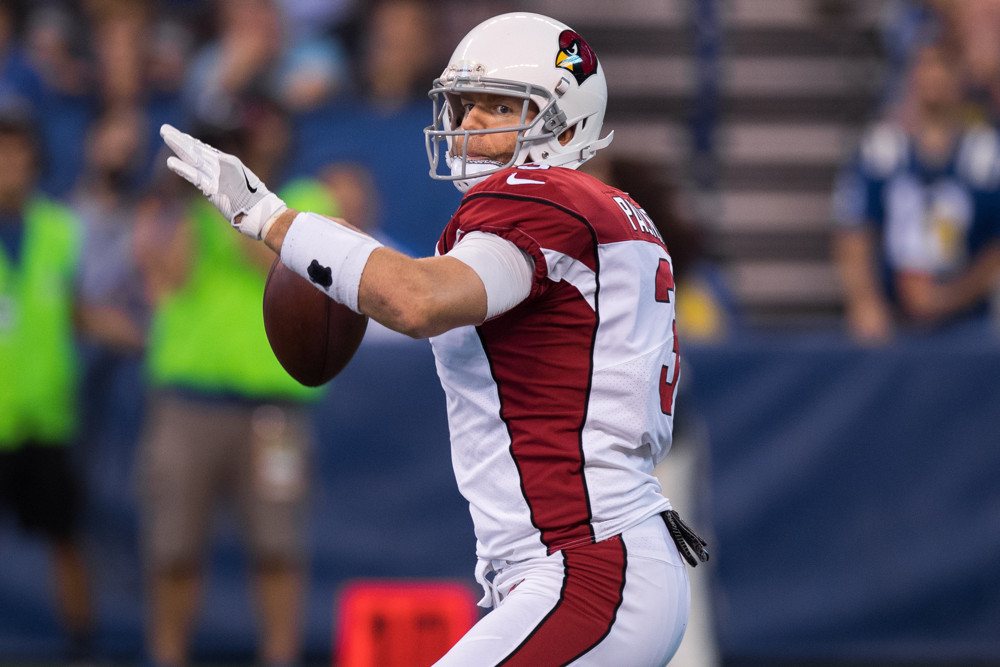 Don’t expect a lot of running in this one. It’s a Carson showdown as Wentz and Palmer air it out in a battle for Carson superiority in Philadelphia. Neither team has been able to run the ball or defend much, so you’ll want to start all your Eagles and Cardinals passing options in this one.

Palmer continues to put up big numbers with over 320 yards a week, and the Eagles have allowed the second most passing yards of any team. Palmer is usually a low end QB option but he looks like a solid starter this week.

Philadelphia has allowed the fourth fewest rushing yards, and Arizona has struggled to run the ball without David Johnson anyway. Ellington has been a better option than Chris Johnson and should be again this week but he’s just a flex PPR play.

The Cardinals will be passing all game, and that should mean another big game for the ageless Larry Fitzgerald. He could have a shot at ten catches and a hundred yards.

While John Brown and J.J. Nelson have struggled through injuries, Jaron Brown may have claimed the WR2 job outright. He’s playing almost every snaps and averaging over 10 targets a game the last three weeks. He should be owned in every format and looks like a WR3 this week.

It’s tough to know where Arizona’s targets will go, but there should be plenty to go around this week against the Eagles. Brown and Nelson are both decent flex option dart throws.

The Eagles have been passing plenty and Wentz has produced solid numbers against pretty good pass defenses so far. Arizona is a team he can beat, and that should make Wentz a usable QB1 with the bye weeks here.

Smallwood and Blount split the snaps and workload evenly last week, and that hurts any value either might have had. Arizona has been a top five defense against RBs this season, so you should probably avoid both of them this week.

Jeffery continues to rank among the league leaders in targets and air yards but has yet to have a huge breakout game for the Eagles. He’ll have his hands full with Patrick Peterson. He allowed under 100 yards combined to T.Y. Hilton, Dez Bryant, and Pierre Garcon the last three weeks.

Arizona has been strong against tight ends but they did allow eight catches and 79 yards to Jack Doyle Week 2, and Ertz continues to be the top target in a passing offense. He should have another good week ahead.

The Cardinals have allowed 16 sacks the last three weeks, and they’ve allowed the fourth most points to opposing fantasy defenses so far. Philly has a great pass rush and should come after Carson Palmer all game, so their defense could be a top five play.