Jeremy Hill's fantasy value is measured by the players he could be traded for. Our trade analzyer estimates his value at 0 points.

Jeremy Hill is projected for 0.0 fantasy points in PPR scoring this week as he faces the Pittsburgh Steelers.

Jeremy Hill: Sent off by Raiders

The Raiders released Hill on Wednesday, Vic Tafur of The Athletic reports.

Analysis: Hill's time with the Raiders amounted to three days, and this move comes on the heels of Devontae Booker being activated from the reserve/COVID-19 list Tuesday. At the very least, Hill has proved the health of his right knee and will look to land an opportunity with another organization. 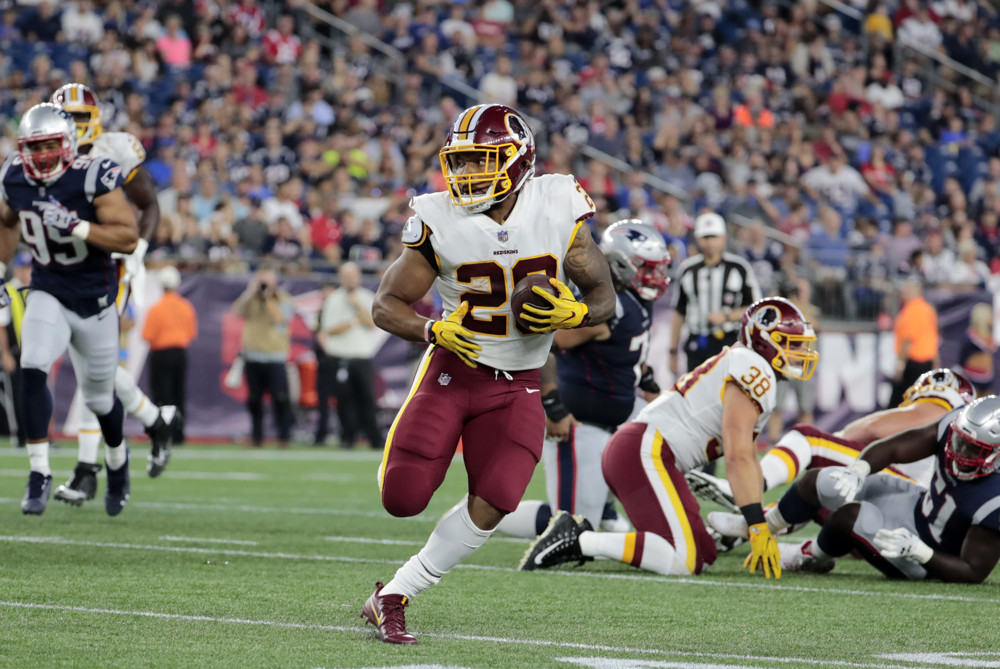 Should I start Jeremy Hill?

Jeremy Hill is one of the top NFL running back who currently plays for Cincinnati Bengals. He was one of the top drafted talents into the team during the 2014 NFL Draft after he impressed as a college football player at Louisiana State University (LSU). Ross Dellenger of New Orleans Advocate reports that Hill is probably the best RB the game had ever seen after he made a 4.52-second 40 time dash, which is by far better than his previous 4.66 at NFL combine.

The 25-year-old native of Baton Rouge, Louisiana, Hill started his career as a sports figure in the Redemptorist High School, where he took part in football, and baseball, as well as other sports. As he grew older, Hill decided to focus more on his football playing skills. He has earned 302 carries for 2,260 yards and 36 touchdowns in his first full season. He was also listed as one of the 4-star recruits before he went to college.

In college, Jeremy Hill quickly picked up the ball from where he left off as he was a first-team member of the All-Southeastern Conference (SEC) selection. He also won the award for the most valuable player (MVP) (an award he claimed scoring an incredible 216 yards and two touchdowns against Iowa at the 2014 Outback Bowl).

Hill joined Ciannati Bengals to kick-start his NFL career signing a four-year contract that saw him earn a whopping $3.71 million as salary. He made his professional debut in the game against the Baltimore Ravens. Hill rounded up his rookie season with the club scoring an impressive 222 carries for 1,124 rushing with nine rushing touchdowns. Hill also provided 22 receptions for 215 receiving yards and played in 16 of the Cincinnati Bengal's regular season games starting nine of the games.

In 1997 he hit a string of records for the Bengals by being the first rookie to reach 1,000 yards (a record at the time that was previously held by Corey Dillon since 1997). His record of 1,124 rushing yards was also the most among rookies in his first season and 8th overall in the entire NFL. Jeremy Hill's 5.1 yards per carrying average put him on the second spot amongst NFL running backs (only Justin Forsett beat him to the number one spot on the list).

On January 4, 2015, Hill participated in his first playoff game on the 4th of January, 2015 and scored 23 carries for 47 rushing yards. He also scored the Bengals' lone touchdown in their 26–10 loss to the Indianapolis Colts. He kicked off his second season as the number one running back for the Cincinnati Bengal's ahead of the more experienced Giovani Bernard.

On December 6, 2015, Jeremy Hill achieved a season-high of 98 yards on twenty carries and a touchdown in his team's 37–3 victory over the Cleveland Browns. This was his 8th touchdown of that season.

On January 9, 2016, Hill upped the ante by running for 50 yards on 12 carries and got a touchdown in the Cincinnati Bengals' AFC's Wildcard game against the Pittsburgh Steelers. But dropped the ball and this led to a Steeler's fight back that resulted in an 18-16 victory with less than two minutes to go. However, he finished the season tied with Devonta Freeman, Adrian Peterson, and DeAngelo Williams for the most rushing touchdowns in the National Football League.

In the 2016 Bengals' season-opener, Hill attained nine rushing runs for 31 rushing yards and got a touchdown in a 23–22 victory against the New York Jets. He achieved a season-high of two touchdowns in the Bengals 17–29 loss to the Denver Broncos. He is a specialist in the vertical is a tactical system in football.

Jeremy Hill enjoys a luxury life off the field which he shows off the highlights from his Instagram account that has reached over 300,000 followers. With his famous number 83 jersey splashed all over the page. He also has a healthy number of fans on Twitter. There has been no report on his dating life although he has been linked to a couple of ladies in the past.

Hill besides enjoying a luxury life has had several run-ins with the law. He reportedly pleaded guilty to having carnal knowledge of a juvenile in 2012. He was also arrested and charged after getting involved in a bar fight. In a September 2013, he was filmed assaulting a man and pleaded guilty to the charges filed against him.