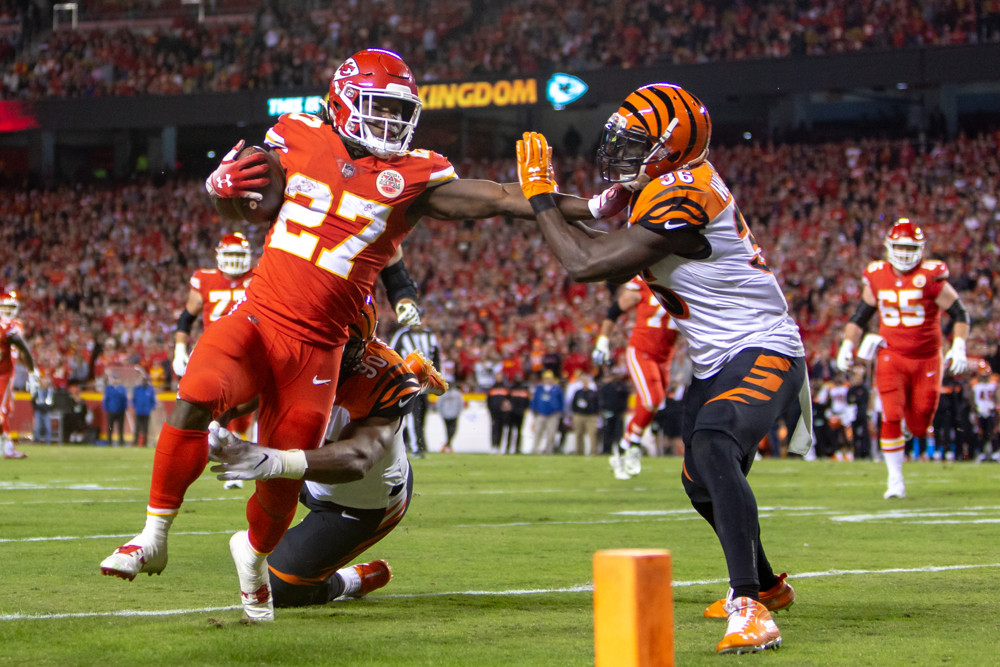 The season's record scoring pace finally took a hit with a quiet fantasy day for most and a lack of points all around. Mahomes, Gurley, and Thielen continued their #1 production at each position, but disappointment reigned for most other players. Let's dig into the numbers.

A quiet week for most didn't slow Patrick Mahomes down any. Ho hum, another 358 yards and 4 TDs for Mahomes plus 45 rushing yards as he continues his MVP campaign. Mitchell Trubisky also continued his recent fantasy surge with 333 yards and 2 TDs while also adding an impressive 81 yards and a TD on the ground. Andrew Luck also added 4 passing TDs.

Andy Dalton was the biggest bust, with just 148 yards and a TD in what was expected to be a shootout between two great offenses, but only the Chiefs offense showed up. Blake Bortles was even worse for anyone unfortunate enough to rely on him, tallying only 61 yards before getting benched. Case Keenum's team scored 45, but he had only 161 yards and a TD so that was a bummer too.

The RBs for the two hottest teams in the NFL were fantasy studs again. Both Todd Gurley and Kareem Hunt had 3 TDs on Sunday, and Hunt added 141 yards on top of it. Marlon Mack was a surprise stud for the Colts with 159 combined yards and a pair of TDs. James White and Latavius Murray each scored 2 TDs as well, both nearing 100 yards on the day.

There were quite a few disappointing RBs in Week 7. Ezekiel Elliott and David Johnson led the way, each failing to reach 40 rushing yards or find the endzone. Other high picks Joe Mixon, Mark Ingram, and Alex Collins each finished around 50 combined yards without a TD. Austin Ekeler's 66 combined yards weren't so bad, but they were awfully disappointing with Melvin Gordon out. LeSean McCoy had only one yard and left hurt. Other back-end RB plays like Matt Breida, Corey Clement, and Peyton Barber were all massive busts and failed to score even 5 fantasy points. It was a rough week.

The lack of big passing games left just a few standout Week 7 WRs. Emmanuel Sanders led the way on Thursday night with 102 yards and a TD while also throwing a second TD. Adam Thielen had his seventh consecutive 100-yard receiving day plus a TD, and John Brown led receivers with 134 yards and a TD. Jarvis Landry had 10 catches for 97 yards and finally found the endzone.

Allen Robinson has gone missing, with just 1 catch for 4 yards, and Tyler Boyd was unable to produce in a dream matchup with just 3 catches for 27 yards. Marquise Goodwin broke out Monday night but had only 24 yards this week, and Corey Davis struggled with just 10 yards in London. The Lions trio of Golden Tate, Kenny Golladay, and Marvin Jones all disappointed this week with just 102 yards combined.

Trey Burton finally had the breakout game we've been waiting for with 9 catches for 126 yards and a TD. Week 7's other stud TE was a dude named Michael Roberts. Roberts came into the day with 5 catches in his career before adding 3 more for 48 yards and a pair of TDs. Zach Ertz had a monster yardage line with 9/138, and George Kittle had a TD and almost 100 yards.

Rob Gronkowski was the biggest dud, a late scratch. Eric Ebron failed to live up to his recent lofty production with 3 catches for 31 yards.