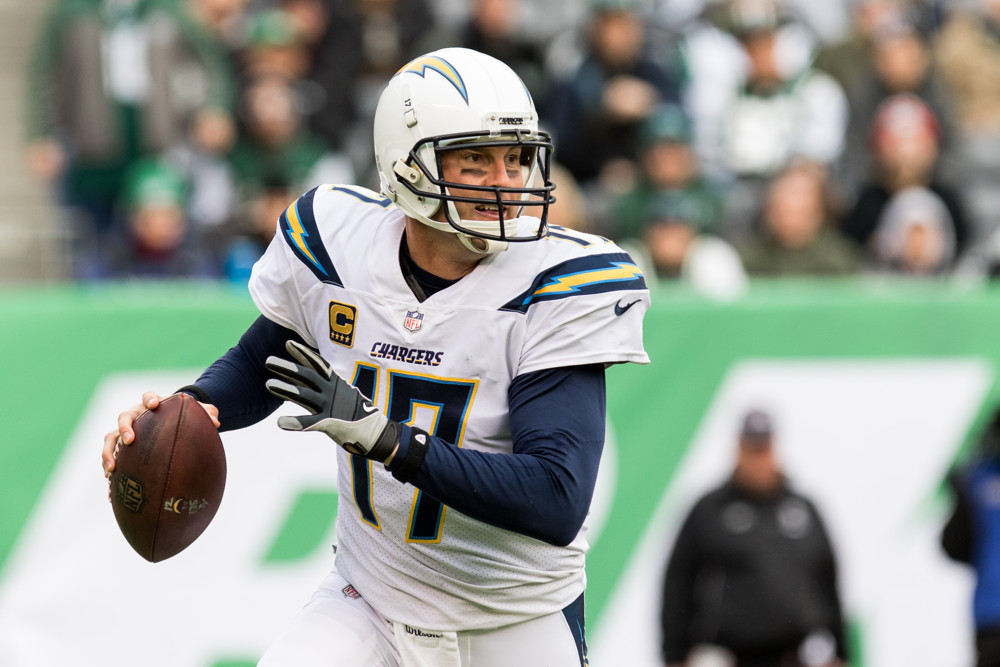 Happy New Year! This week finalized all the playoff scenarios and the regular season has wrapped up. Let's review the best and the worst fantasy performances in Week 17's Fantasy Football Wrap Up.

Philip Rivers threw for 387 yards, 3 touchdowns, 0 interceptions as the Chargers won their matchup against the Oakland Raiders on Sunday. Rivers finished as the highest-ranked quarterback of the week with 28.0 fantasy points and finishes as QB8 on the year. Matthew Stafford had a great bounce-back game against the Green Bay Packers this week and scored a total of 27.1 fantasy points. Stafford threw for 323 yards, 3 touchdowns, and 0 interceptions while also throwing for a 2-point convert and finished as the second-highest scoring QB of the week.

In a game that meant little for the Jacksonville Jaguars, Blake Bortles did not finish his season on a high after throwing for 158 yards, 0 touchdowns, and 2 interceptions against the Tennessee Titans; Bortles also ran for 9 yards on 1 carry and finished the day with 3.2 fantasy points.Kirk Cousins was unable to exploit a weak Giants secondary and threw for 158 yards, 0 touchdowns and threw a season-high 3 interceptions but was able to score on his only carry from 12 yards out. While Cousins finished the year as the 8th highest scoring quarterback in the league, he was only able to score 7.5 fantasy points during the final week of the regular season.

For the second time in as many weeks, Dion Lewis finished as a top-2 running back of the week. Lewis ran for 93 yards and 1 touchdown on 29 carries and had 40 yards and 1 touchdown on 6 receptions, scoring 31.3 fantasy points. Alvin Kamara finished his regular season with another strong performance, running for 44 yards and a touchdown on 9 carries, and had 6 receptions for 84 yards. Kamara finished the day with 30.8 fantasy points and was the 3rd highest scoring fantasy running back over the course of the season.

Isaiah Crowell has disappointed fantasy owners all year and this week was no exception. Crowell only gained 21 yards on 15 carries and did not record a catch, scoring 2.1 fantasy points. Jordan Howard is another player that frustrated fantasy owners all year long and with the firing of John Fox in Chicago this morning, owners will have to wait until next season to reap those benefits. Howard gained a laughable 9 yards on 9 carries, caught his only target for 5 yards, and finished the week with only 2.4 fantasy points.

JuJu Smith-Schuster balled out against the Cleveland Browns in Week 17 and finished as the highest-scoring fantasy wide receiver of the week with 35.3 fantasy points. Smith-Schuster hauled in 9 receptions for 143 yards and a touchdown and returned a kick-off for a touchdown. Keenan Allen has had an impressive bounce-back year and finished the year as the third-highest scoring wide receiver. This week Allen recorded 133 yards on 9 receptions and a touchdown, recovered a fumble for his second touchdown of the day, and finished with 34.5 fantasy points.

With Jacksonville playing their defensive starters, Rishard Matthews was only able to haul in 1 of 2 targets for 7 yards, finishing with 1.7 fantasy points. In a Cincinnati Bengals' win against the Baltimore Ravens, which gave the Buffalo Bills their first playoff berth in what feels like forever, A.J. Green was held in check. Green could only catch 2 of 10 targets for 17 yards and finished with 3.7 fantasy points.

The highest-scoring tight end from this past week was Tyler Kroft who has done well for fantasy owners who were able to pick him up early in the season. Kroft had 6 receptions for 53 yards and 2 touchdowns, finishing with 23.3 fantasy points. George Kittle continues to build his rapport with Jimmy G and hauled in 4 receptions for 100 yards, finishing with 14.0 fantasy points.

Rob Gronkowski was not targeted, scored 0 fantasy points, and is a great example of why the fantasy championship should not be held in Week 17. Gronk finished as the 2nd-highest scoring TE on the season but was not needed in the Patriots' victory over the New York Jets in which he played over 67% of offensive snaps. For the second time in as many weeks, Kyle Rudolph was seldom used in their victory against the Chicago Bears and only had 1 catch for 3 yards, resulting in only 1.3 fantasy points.

The highest-scoring defenses of the week were the Detroit Lions Defense and Kansas City Chiefs who each scored 17.0 fantasy points on Sunday. The Lions were able to force Hundley into bad decisions all day and recorded 2 interceptions, 4 sacks, and recovered 2 fumbles. Meanwhile, the Chiefs also had 2 interceptions, 5 sacks, and recovered a fumble for a defensive touchdown.