In recent drafts, Jones's current ADP is 10.04, which indicates that his fantasy outlook is in the 4th pick of the 10th round, and 111th selection overall. 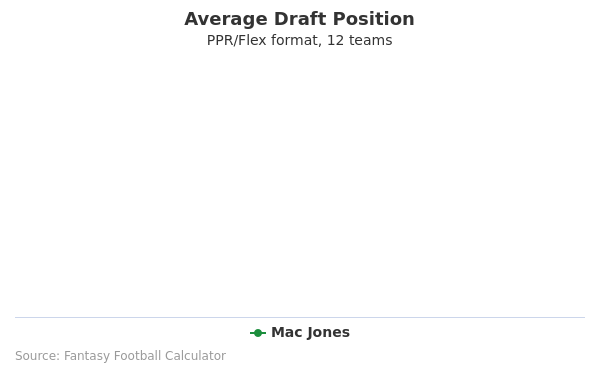 The code below will display a graph that updates every day to show the ADP data for Mac Jones for the past 30 days in 12-team PPR leagues.

Jones completed 24 of 38 passes for 232 yards, two touchdowns and two interceptions in Saturday's 47-17 loss to Buffalo.

Analysis: Though New England was overmatched in nearly all aspects of its wild-card matchup, Jones was unable to get the offense moving while the game remained within reach. His play during the first offensive possession was an exception, as he found Hunter Henry for a 30-yard completion and also scrambled for a 16-yard gain. However, he was picked off by Micah Hyde in the end zone to end the rally. After that, positive plays were few and far between, as Jones ended the first half with only 10 completions for 106 yards. He managed to pad his stat line with a pair of touchdown passes to Kendrick Bourne with the Patriots down by at least three scores in the second half. Despite the loss, Jones showed promise during his rookie season and will be back under center to lead the New England offense for the 2022 campaign.

Should I start Mac Jones?