Tyreek Hill's fantasy value is measured by his average draft position (ADP) in fantasy football mock drafts. In recent drafts, Hill's current ADP is 2.01, which indicates that his fantasy outlook is in the 1st pick of the 2nd round, and 13th selection overall. 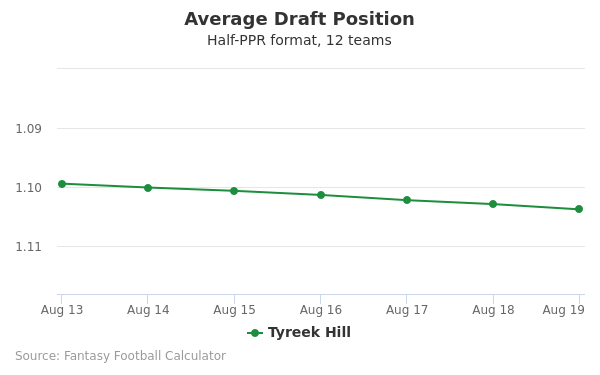 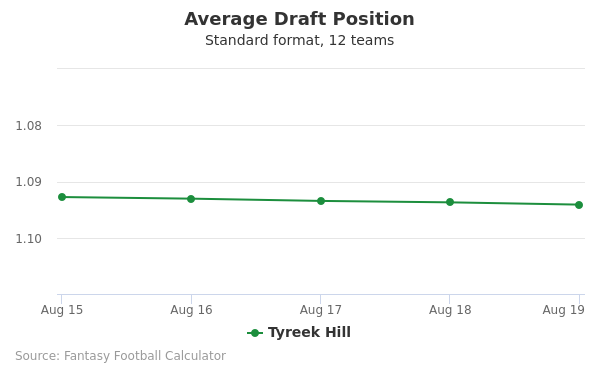 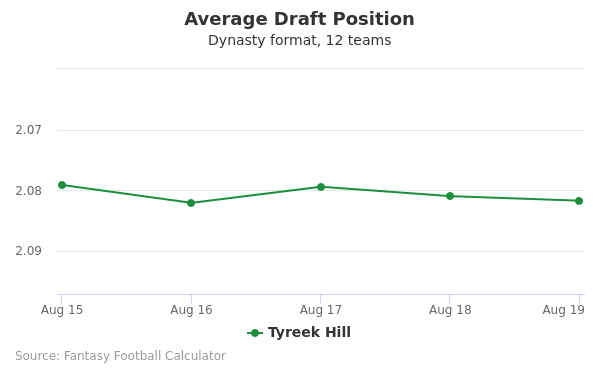 The code below will display a graph that updates every day to show the ADP data for Tyreek Hill for the past 30 days in 12-team PPR leagues.

Should I start Tyreek Hill?

Start Will Fuller or Tyreek Hill?

Should You Start Tyreek Hill This Week?

Tyreek Hill is a wide receiver and kick return specialist for the Kansas City Chiefs. Hill had a volatile college career, that included him attending three different schools. The Chiefs were said to be taking a risk on drafting him, but they did, and he emerged as one of the team's most explosive weapons in the just completed season.

Hill was born March 1, 1994 in Lauderhill, Florida. He was raised in Pearson, Georgia, and attended Coffee High School. He was a track star, winning state titles in the 100 and 200 meter dashes.  His best time in the 200 (20.14) was one hundredth of a second behind the national high school record. He was Track and Field's athlete of the year in 2012. Though he was very fast, he was not heavily recruited out of high school for football, though he excelled at track, football and basketball. He was considered more of a tr.ack person

He started his college career at Garden City Community College, running track and playing football. As a sophomore he started to catch on in football, running for 659 yards and five touchdowns, with 532 yards receiving. He signed with Oklahoma State and started the season with 62 yards receiving.  He returned a punt 92 yards against arch rival Oklahoma to help the Cowboys defeat the Sooners. He had 1,811 all purpose yards, and six touchdowns. His 996 return yards was second in the nation. After one season he was dismissed by Oklahoma State. He finished his college career at West Alabama.

Though Hill was an obvious talent, no one thought he would be drafted because of his legal problems. He had pled guilty to choking his girlfriend while at Oklahoma State.  He was not invited to the NFL Combine, but performed at West Alabama's Pro Day. Hill's 40 time was 4.29 with a 20-yard split of 2.15 seconds. His vertical leap was 40 and a half inches, and his broad  jump was 10 feet, nine inches.  He was eventually drafted in the fifth round by the Kansas City Chiefs. Since Hill was drafted so low, he did not get a high dollar salary from the Chiefs. His reported contract for his rookie year was worth $497,500.

Hill had a breakout season in his rookie year. He started the season as the first team punt returner, and as the fourth receiver. He finished the year with 61 catches for 593 yards and six touchdowns, 267 yards rushing and three touchdowns, and 384 yards returning kicks with one touchdown.  He was named to the 2017 Pro Bowl as a return specialist, and was also all pro as a returner.  His first catch of his career was for a touchdown in the opening game.  In one game he had 89 yards receiving, which was a season high.  In November he returned a kick 86 yards for a touchdown. In that game, he was the first player to score returning, receiving and rushing in the same game since 1965 and was named AFC Offensive player of the week as a result.  He was named special teams player of the year twice during his rookie season.   During one of his punt returns for a touchdown, he reached a speed of 22.77 miles per hour, which was the fastest recorded by anyone during the season. After the season was over, the Chiefs were considering putting him into the starting lineup as a receiver, while continuing his kick returning duties.

Hill was dismissed at Oklahoma State after the regular season, and before their bowl game, on domestic abuse charges. While at Oklahoma State he was accused of choking his girlfriend who was pregnant at the time. He ended up at West Alabama after that, and the West Alabama coach said he at first turned Hill down, but later accepted him. The Chiefs were well aware that someone with a domestic abuse charge would create some controversy, and they held a press conference to address the issue after the draft. Hill has accepted responsibility and is paying to support the woman and her child.