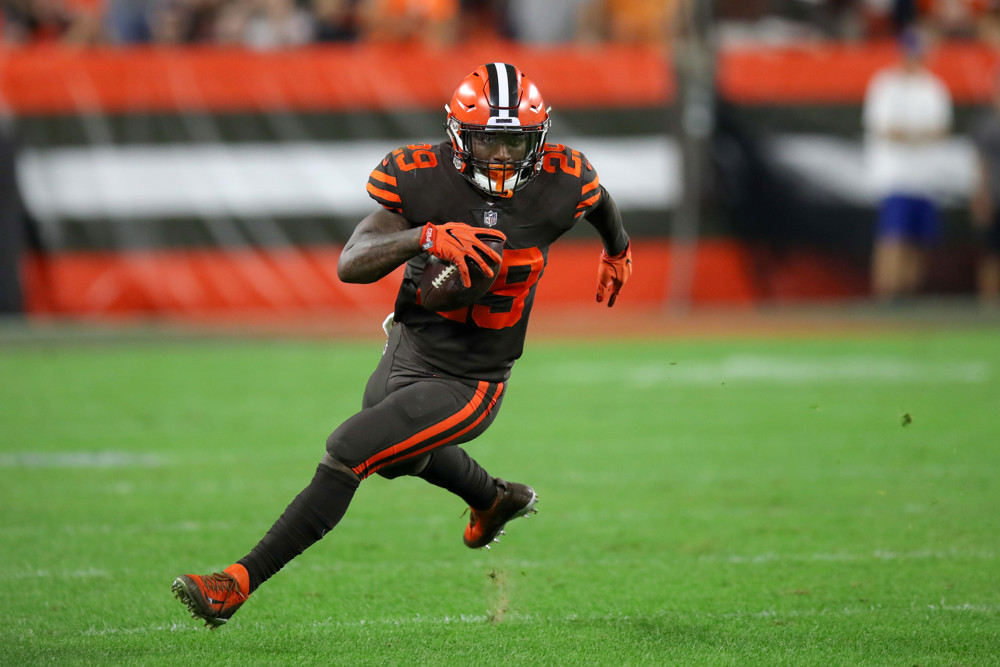 It's getting closer and closer to playoff time, and you may be starting to scour the waiver wire for stashes. There were few injuries this week, but there is plenty of opportunity for waiver wire adds as we continue our Byepocalypse in Week 10. Some players broke out this week, some returned from injury after a long absence, and others are just guys/teams to target thanks to their nice fantasy playoff schedule. Here is what we are looking at after Week 9.

Only one game into the tenure of a new OC and Duke Johnson Jr is already reaping the benefits. Johnson only carried the ball once for 8 yards, but caught 9 of 9 targets for 78 yards and 2 touchdowns in the Browns' Week 9 loss to Kansas City. Johnson showed once again why he is such an asset to the passing game. Cleveland gets Atlanta at home next week, which means that the Browns will be throwing early and often to keep up with the heavy Falcons' pass attack. Johnson should be added in 10 team leagues.

This isn't the first time RB Mike Davis has been on the list, but this time he is a much higher priority thanks to the Seahawks' new run first philosophy. In Week 9 against the Chargers, Davis rushed 15 times for 62 yards and caught 7 passes for an additional 45 yards. Davis is a top priority this week mostly due to the injury to Chris Carson. Carson left this game early after being questionable with a hip injury all week. It wouldn't be surprising to see Carson rested a few weeks, but monitor the situation. Even if Carson doesn't miss time, Davis is in line for a decent amount of work.

Elijah McGuire returned for the first time in 2018 against the Miami Dolphins in Week 9. He carried the ball 7 times for 30 yards and caught 3 of 5 targets for 37 yards. McGuire had a lot of hype last year, but that was before RB Isaiah Crowell became a Jet this offseason. Crowell will still see a majority of the carries, but McGuire should get worked in a bit more often. He has the talent to be a 3-down back, but that would require a Crowell injury. As of now, McGuire is a deeper league add.

Adam Humphries has always been a bit of a PPR type WR. Humphries never really explodes, but he typically is good for 10-15 points in fantasy. For the first time in 2018, Humphries is an intriguing waiver wire addition. He caught 8 passes in Week 9 for 82 yards and 2 touchdowns. Over the past three weeks, Humphries has been targeted 27 times and seems to be in a dream spot on the Buccaneers. The defense is horrible, and QB Ryan Fitzpatrick loves to sling the football. With WR Mike Evans and DeSean Jackson seeing a majority of the tougher coverage, Humphries may continue to see big target numbers. He is a 12-14 team league addition.

Jeff Heuerman exploded for 83 yards and 1 touchdown on 10 receptions in Week 9 against the Houston Texans. It's only one game, but it could be a direct outcome of the loss of WR Demaryius Thomas. Unfortunately for teams in desperate need of a TE, Heuerman is on Bye next week. He gets the Chargers, Steelers, and Bengals once the Broncos return. Keep an eye on him going forward.

QB Ryan Fitzpatrick sure didn't start off magical in his Week 9 loss to Carolina, but he made up for it as the game went on. Fitzpatrick completed 24 of 40 attempts for 243 yards, 4 touchdowns, and 2 interceptions. There isn't much to say about him that we don't already know. The Bucs defense stinks, the offense has high powered weapons, and Fitzpatrick loves slinging the football.

The Jets defense continued their solid season in Week 9, limiting the Dolphins to 7 points. The defense did record 4 sacks, but that was it this week. The Jets are a defense to look at because they have a nice schedule in the next 5 weeks. They get Buffalo in Week 10 and 14, and Tennessee in Week 13. If you can afford to hold onto this defense for a while, they could have some big outings for your fantasy team.

If you are a lock for the playoffs, you may want to grab one of the hottest defenses in the NFL. The Redskins have looked great (besides last week when they were destroyed by Atlanta), and have a very soft schedule in Weeks 14-16when most leagues are in their playoffs. They face the Giants at home, and then Jacksonville and Tennessee to finish off the fantasy season. If you can afford to hold 2 defenses, Washington may be the way to go.