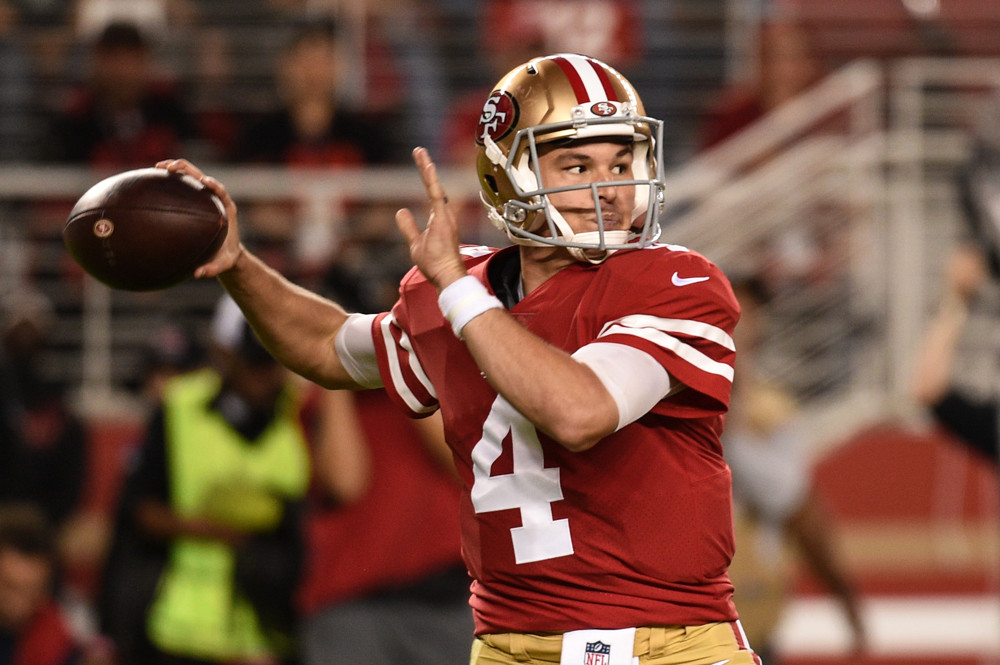 Week 9 had two big time showdowns. The Patriots and Packers matchup was a bit of a disappointment from a fantasy perspective, but you were probably happy with just about anyone you had in the Saints and Rams shootout. Let's take a look at this week's studs and duds.

Week 9 saw some big passing games, but Matt Ryan and Drew Brees led the way with nearly identical lines. They each threw 4 TDs and had 350 and 346 passing yards, respectively. Fitzmagic returned as Ryan Fitzpatrick hit 4 TDs of his own. Patrick Mahomes had another big game as both he and Jared Goff went over 375 yards with a trio of TD tosses. And a shout to undrafted unknown Nick Mullens, who made his first start in front of a national TV audience Thursday night for San Francisco and threw three TDs against the Raiders.

Mullens was the only Thursday night QB that showed up. Derek Carr had only 171 yards and failed to score a TD, and Matt Stafford also was under 200 yards and scoreless. Mitch Trubisky had only 135 yards and a late TD despite 41 Bears points.

A couple bell cow RBs had monster games as both Kareem Hunt and Alvin Kamara found the endzone three times. Hunt added 141 combined yards, and Kamara was over 100 too. Christian McCaffrey and Tevin Coleman each went over 150 combined yards with two TDs for big fantasy days. James Conner stayed hot with LeVeon Bell on the sidelines, scoring a TD with 163 combined yards.

Adrian Peterson continues to run hot and cold, rushing just 9 times for 17 yards. LeSean McCoy had a tough matchup but still managed just one yard per carry across 10 carries. Tarik Cohen finally cooled off with just seven touches for 13 yards, and Lamar Miller slowed down too with 12 rushes for 21 yards. Kerryon Johnson had only 44 combined yards and anyone that tried a RB in the messy weather of the Jets and Dolphins game was disappointed as Kenyan Drake, Isaiah Crowell, Elijah McGuire, and Frank Gore all failed to crack 60 yards.

There weren't a ton of big receiver games, but Michael Thomas was the exception with a monster 211 yard effort including the late TD to knock off the undefeated Rams. The other three big games came from Julio Jones, DeAndre Hopkins, and Brandin Cooks, who each went over 100 yards with a TD.

Guess Adam Thielen can't do it every week. It says something how high the bar has been set when a dude gets a TD but has only 22 yards and we're disappointed. Mike Evans turned 10 targets into just one catch for 16 yards. John Brown and Tyler Lockett also disappointed after strong first halves, each catches 3 balls for under 25 yards. Marquise Goodwin, Jordy Nelson, and Martavis Bryant all disappointed on Thursday night.

Week 9 was good to tight ends, and Travis Kelce led the way with a pair of TDs and just a yard short of triple digits. George Kittle did hit triple digits with 108 yards and a TD, and Denver's Jeff Heuerman surprised with 10 catches for 83 yards and a score. O.J. Howard was the other big name with two TDs and 53 yards.

It's tough to nag on injuries, but Rob Gronkowski was a late Sunday night scratch off a questionable tag and that hurt a lot of owners. Kyle Rudolph also disappointed on a day without Stefon Diggs, recording just 2 catches for 28 yards.