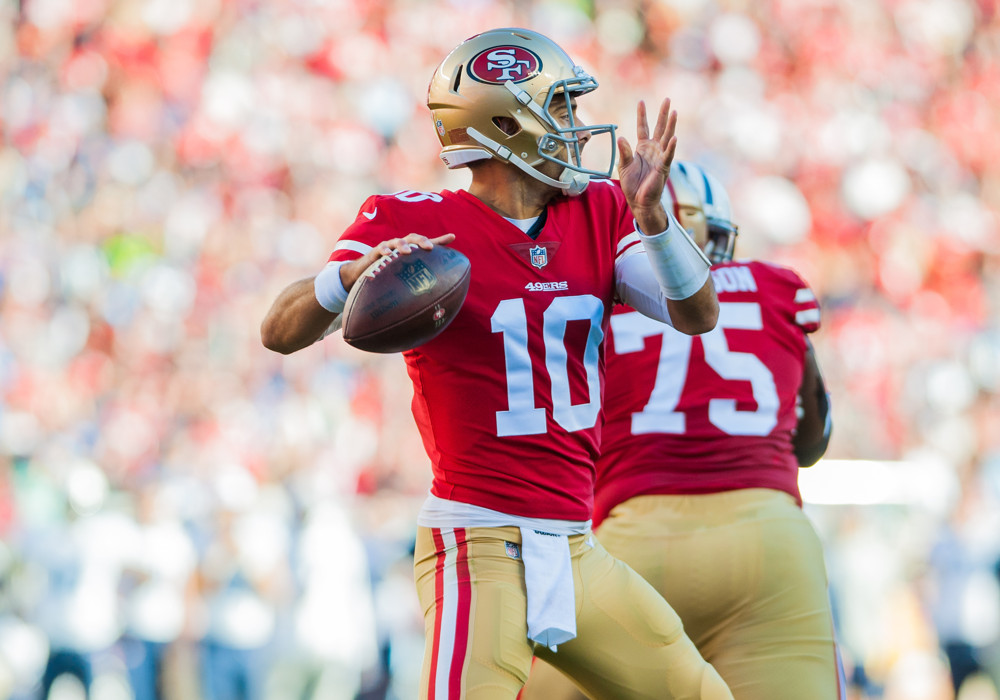 The season is never over in keeper and dynasty leagues. If you're already out, it's time to make some roster moves for next season. Below are 10 quarterbacks worth stashing that could pay off for your 2018 fantasy team.

We're not even counting these three, but make sure they're owned.

Handsome Jimmy G came to the 49ers midseason and took a 1-10 team to consecutive wins. He threw for 627 yards in those two games and already has good chemistry with Marquise Goodwin and rookie Trent Taylor. Looks like San Francisco has their guy, and Garoppolo will only get better with an offseason to learn the offense. You might not think much of San Francisco's offense, but you probably weren't that excited about Matt Ryan last year either before Kyle Shanahan turned him into the MVP.

All three Minnesota quarterbacks will be free agents, but signs point toward Bridgewater and Case Keenum being kept on next season, with Sam Bradford moving on. The Vikings have put a lot of capital into developing Bridgewater, so he should get the start, and he'll have had two years to fully rehab a gruesome knee injury by next fall. Minnesota has one of the best receiver duos in the league in Adam Thielen and Stefon Diggs, and the Keenum/Bradford combo has been a top ten fantasy QB in 2017. Bradford could start here or elsewhere depending on how things play out.

A few months ago, many assumed this season would be the end of Drew Brees in New Orleans. Brees's contract is up after this year and it looked like the Saints were moving into a rebuilding period and ready to move on from him. Now they could be on the verge of a Super Bowl run. If things do go south again, Daniel could be the one-year patchwork solution for a high-powered Saints offense, and he would have decent upside if so. Daniel will be a free agent too, so he could end up as a one-year starter elsewhere, or he may just be a backup again.

If you're in a 2-QB league just looking for possible starters, these are the young guys to stash. Webb is an intriguing rookie who could get a shot to throw to Odell Beckham, Sterling Shepard, and Evan Engram if the Giants decide to move on from Eli Manning. Mahomes could get to replace this year's #3 fantasy QB Alex Smith if the Kansas City season ends poorly. Kizer and Lynch are on teams expected to draft a quarterback but both have dual threat upside if they get a chance.

It's tough to see either of these guys suddenly turning into a QB1 option next year, but both guys have good weapons and a secure starting job and they make a steady backup or a definite starter in 2-QB leagues, and they might be on waivers thanks to season-ending injuries this year.