Five PPR Running Back Sleepers for 2018 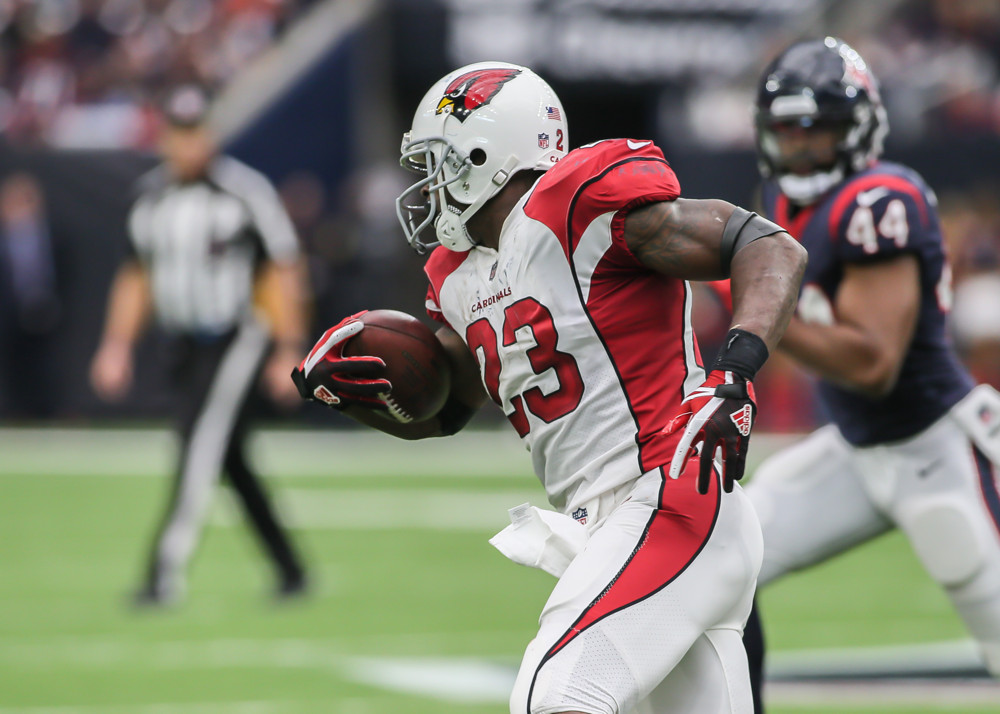 A few weeks ago we looked at Five Overvalued PPR Running Backs. Now we are going to go to the opposite end of the spectrum and look at a few running backs that might be almost entirely overlooked.

We are here to talk about the guys you find at a way cheaper draft price: your Theo Riddicks, Duke Johnsons, or Giovani Bernards, if you will. A solid pass catching running back can be a good filler for bye weeks, or have the potential to become a starter in their offense if the main running back goes down.

Even running backs without a pass catching talent can be league winners that you find off the waiver wire. Let's take a look at a few sleepers worth thinking over in the last few picks of your draft.

We will start off with a bang here in saying that Adrian Peterson has some serious sleeper value in 2018. He just signed with the Washington Redskins, who just lost RB Derrius Guice to an ACL tear and Samaje Perine to an ankle injury (1-2 weeks as of now). The only healthy back left is Rob Kelley, who over his career has failed to impress.

Now Peterson hasn't been amazing in the last few years, but he did show in 2017 that he has some gas left in the tank. He had huge games for the Cardinals, rushing for 134 yards and 159 yards. He also caught passes out of the backfield in every game he played for Arizona.

Peterson is currently being undrafted, although he may creep up draft boards now that he was added to a NFL team. If he is given the chance, Peterson could explode this year.

James White went off in the second preseason game, rushing four times for 31 yards and catching six passes for 61 yards and one touchdown. QB Tom Brady has always shown trust in White, and injuries to RB Sony Michel and RB Rex Burkhead could force White into the spotlight.

The nice thing about White is that he will always get some action week to week, but he does need a little help in order to become the main guy in New England. This year he might just get the chance.

As mentioned before, both Michel and Burkhead have semi-serious knee injuries, and if they decide to play on them it's only a matter of time before one or both go down with worse ones.

Fantasy owners are starting to catch on, drafting White at the end of the ninth round as the 44th running back off the board. White has always been a solid PPR back, but normally is too risky to start thanks to the plethora of RBs on New England's offense. With the injuries to a few of their RBs, White just got a little bit more valuable.

Believe me; I'm very high on Joe Mixon this year. But it seems as though owners are so high on Mixon that they completely forgot about the Bengals' resident running back: Gio Bernard. Bernard is currently being drafted in the 11th round (47th RB), almost nine rounds later than his colleague.

But if you have any experience with HC Marvin Lewis, you know that he will continue to use Bernard, especially in passing downs and two-minute offenses. Bernard has always been a solid PPR running back, catching at least 40 passes in each of his first five seasons. He also has plenty of rushing opportunities, averaging 164 rushes in his first three seasons. His fourth season he was injured (only 91 carries) and in 2017 the Bengals had one of the lowest number of rushes in the NFL (Bernard had 105 carries).

2018 is looking like a real bounce back year for the Bengals, and a pass catching RB who has shown he is valuable in the past is a nice grab in the 11th round.

Another running back overlooked thanks to a fresher face, Peyton Barber has looked solid in preseason thus far. Barber is entering his third season for the Buccaneers, and finally has a chance to be the starting running back now that Doug Martin is gone. And he is only 24 years old.

However thanks to the drafting of rookie Ronald Jones early in the second round of the NFL draft, fantasy owners have been assuming that Jones would take over the backfield this season. Jones is being drafted three rounds ahead of Barber (sixth round and ninth round, respectively). However Jones has looked awful in preseason, meaning Barber could get the starting role.

Barber has never wowed in the NFL, but he has averaged around a 4.0 ypc in 163 rushes in his first two seasons. He also caught 16 of 19 targets in 2017, which means he has decent catching capabilities.

For now there is a battle for the starting running back position in Tampa Bay. But for fantasy owners, Barber is a cheaper draft capital with more experience and has shown us he is capable of handling starting duties.

For the first time in a long time, Latavius Murray seemed to be healthy in 2017. He rushed 216 times for 842 yards and eight touchdowns. He added 15 receptions for 103 yards. Murray looked good at times, but was often overshadowed by the Vikings other running back: Jerick McKinnon.

This season will be more of the same. McKinnon is gone, but RB Dalvin Cook is now healthy. Cook tore his ACL early last season. It seems as though fantasy owners believe that Cook will handle almost all of the running back duties, since Murray is being drafted late in the 12th round (probably as a handcuff). In reality Murray may have a bigger share of the load than owners believe. The Vikings will want to keep Cook fresh, and probably want to avoid re-injuring his knee.