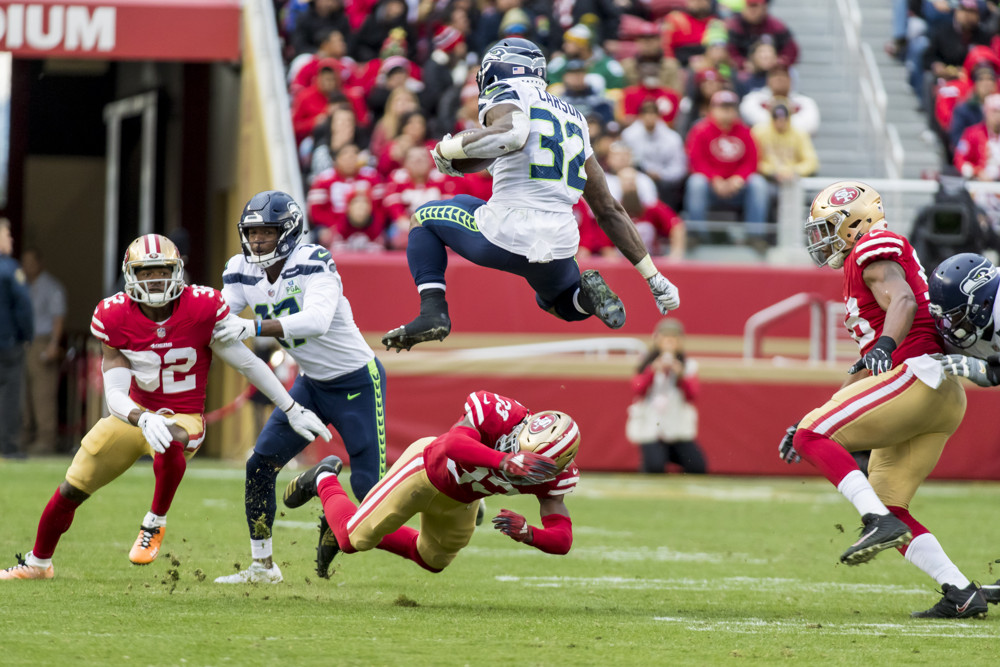 Entering championship week Dak Prescott is ranked as the 15th highest scoring QB and contributed to knocking out a lot of owners last week after posting a measly 6.2 fantasy points - his worst total of the year. Why should owners trust Prescott in the most important fantasy game of the season? First - Prescott is playing at home, where he's averaged 20.5 fantasy points this season. Second - the Cowboys are playing the Buccaneers who are allowing the 4th highest amount of fantasy points to opposing QBs (20.6). With there being a lot of uncertainty at the position this week Prescott should bounce back and provide owners with a very solid floor.

Rashad Penny did not practice Wednesday and his status is still up in the air for this week. If Penny misses this game against the Chiefs, Chris Carson becomes an automatic lock to play in your lineups. Over the last two games, Carson is averaging 22 carries for 104.5 yards and 1 touchdown. This is the type of consistency you want in the playoffs and Carson has delivered thus far. On top of all this, the Seahawks face the Chiefs who give up, on average, 31.2 fantasy points to opposing running backs. Carson should be started as an RB2 with tons of confidence this week.

After starting the season on a tear, scoring 6 touchdowns in his first 4 games, Calvin Ridley has cooled off and only scored 2 touchdowns since, with his most recent coming against the Saints in Week 12. Owners who played Ridley over the past two weeks would have been disappointed with his combined 6-52-0 production. This week, though, Ridley should flourish against a Panthers defense allowing an average of 37.9 fantasy points to opposing team's wide receivers this season. With Cam Newton out this week, the Falcons should see their fair share of possessions against a fairly weak secondary, which is playing on a short week.

With injuries and inconsistency galore at the tight end position, owners may be thin at the position. Matt LaCosse has a very nice matchup this week against the Oakland Raiders Monday night who are allowing an average of 15.6 fantasy points to the position. While this number is skewed by a few big games they've given up, they have consistently given up fantasy points to both elite and mediocre tight ends. With there being only a limited number of pass-catching options left in Denver, LaCosse will look to improve on his 8.3 fantasy points he scored against the Browns last week.

Greg Joseph has very sneaky upside this week against the Cincinnati Bengals who are giving up an average of 10 points to kickers this season. While Joseph only scored 5 points against them back in Week 12, they all came off extra points. The offense can move the ball against this defense and over the past two weeks, the opposing team's kicker against the Bengals has scored an average of 15 fantasy points. It seems as if the Bengals defense has been a tad better at stopping teams in the red zone and if this continues Joseph should be well on his way to posting double-digit fantasy points in this game.

The Miami Dolphins defense has been all over the map this season in terms of fantasy production, however, this week is too much of a good matchup to ignore against the Jaguars. Since Cody Kessler has taken over at quarterback opposing defenses have scored an average of 12.7 fantasy points and the offense has averaged just over 9 points per game. The Dolphins have a fantastic chance to score well over double-digit fantasy points against a very weak offense on Sunday.

Jared Goff is a very risky start this week against the Arizona Cardinals. Not only are the Cards allowing the 6th fewest fantasy points to opposing QBs per week (15.3) they are also terrible at defending the run. The Rams have lost two games in a row and look very mediocre on offense. They will want to establish their running game in this one and take advantage of a defense allowing an average of 30.2 fantasy points to opposing team's running backs and the last time these two teams played Gurley ran for three touchdowns. Goff has averaged 6.2 fantasy points over this last three games and simply cannot be trusted this week.

Adrian Peterson enters the week as RB17 which usually should mean he's an RB2/Flex at worst, right? As of late, due to quarterback injury and toughness of the run defense he's faced, Peterson has come back down to earth and then some. Over the past two weeks, Peterson has run for a pedestrian 33.5 yards per week and the matchup doesn't get any easier this week. The Titans defense has been stellar as of late and currently ranks as the best defense against opposing running backs, allowing an average of only 18.3 fantasy points, and held Saquon Barkley and Leonard Fournette over the past two weeks to 31 and 36 yards rushing on the ground, respectively.

Is there any riskier WR to start this week? Coming off a 2 catch, 12-yard performance in which he scored 3.4 fantasy points against the Saints, D.J. Moore now finds himself without his quarterback Cam Newton this week after it was announced the Panthers are shutting him down for the remainder of the season. While the matchup against the Falcons secondary looks enticing at first, there are a lot of unknowns of how the offense will play without their signal caller - Moore remains an extremely risky play this week.

Trey Burton finally produced for fantasy owners last week due to his touchdown which pushed him over 10 fantasy points for the first time in four weeks. While Burton is TE7 entering this week's matchup against the 49ers, owners should look at this matchup with caution. While the 49ers defense hasn't been strong this season against opposing team's running backs and wide receivers, the one position they have been stout against is the tight end, allowing an average of only 9.3 fantasy points, good for 6th best in the league. If you have Burton and a similar-tiered tight end rostered with a better matchup, start the latter this week.

Dustin Hopkins has been a fairly reliable fantasy kicker this year and enters the week as K14 which includes one week the entire Washington offense was shutout against the Giants in Week 14. Hopkins bounced back from that goose-egg and scored 11 fantasy points but is due for a let down this week against the Titans who have not allowed many fantasy points to kickers on a weekly basis (6.9). This, paired with the fact that the Redskins currently have the lowest implied team total on the week at 13.25 does not bode well for Hopkins to continue his streak of double-digit fantasy points.

The Baltimore Ravens defense is currently ranked 5th in the league however they have a tough matchup this week against the Los Angeles Chargers who are scoring a ton of points on opposing defenses each and every week. The Chargers are allowing the 6th fewest fantasy points against to fantasy defense and have allowed over 5 fantasy points only twice this season (Weeks 2 and 3). While the Ravens have been a fantasy asset this year they are a risky play against a consistent offensive team that will be fighting for a first-round bye.