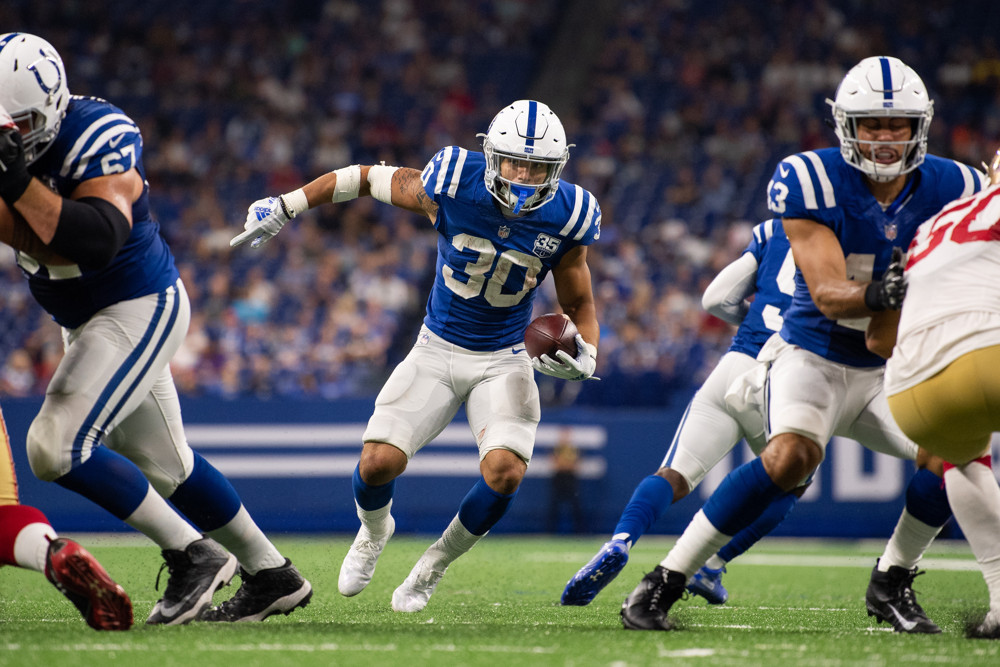 Nevermind the home/away splits being talked about for the past couple of years. Ben Roethlisberger has a great matchup against the Browns who, last year, gave up the 5th-most points to opposing quarterbacks. Even with the Le'Veon Bell holdout in place as of the time of writing this, Roethlisberger should be able to sling around the ball in what could turn out to be a higher scoring game then the line indicates.

Jordan Wilkins should be considered as an RB2 or flex start this week, as he'll be the lead back for the Colts who enter the season against the Bengals. Last season, the Bengals gave up the 2nd-most fantasy points to opposing running backs, with an average of 26.7. Look for Wilkins to start the season hot against a terrible run defense.

While Allen Robinson hasn't yet showcased what his potential in the Bears' offense is, it's known they will be pass-heavy and the game script will be in Robinson's favor, including in Week 1. The Packers should come out firing on all cylinders and Chicago may have to play catch up early and often. In what could be a very back-and-forth game, Robinson will get his and faces a defense that gave up 35.9 fantasy points to opposing team's wide receivers last season which is the 3rd-highest in the league.

Rule #1 last year: Start the tight end who plays against the Giants defense. Last season the G-Men gave up 13 total touchdowns to tight ends, which was the most from any team, and an average of 15.8 fantasy points (2nd-most). If you were one to punt the position on draft day and need a fill-in option for the week, Austin Seferian-Jenkins can be your week 1 solution.

Not only does Mason Crosby get his gunslinger back this season which will extend drives and set up the offense for more field goal attempts, but he also plays the Bears this week which gave up the 11th most fantasy points to the position last year. With the 3rd highest team total currently at 27.5, the Packers are expected to move the ball and score a lot of points, setting up Crosby for many attempts if they are unable to convert in the last third of the field.

The Detroit Lions defense is a fantastic streaming option this week for multiple reasons: First, they play Sam Darnold, who is the youngest QB to ever start in week 1. Is he ready? We're about to find out. Second, the Jets have an implied team total of 19.0 which is second-lowest in week 1. Look for the Lions to hold the Jets to only a couple scores at most while racking up sacks and a pick or two in the rookie's first ever regular season game.

Jimmy Garoppolo is entering the season on a high after finishing the season with 5 consecutive wins. He's expected to get a rude awakening in his first week as he faces a very stout Vikings defense. Last season the Vikes held quarterbacks to an average of only 11.7 fantasy points per game which was the third-lowest in the league.

While Pete Carroll continues to rave about Chris Carson, I'm hesitant to start him in Week 1 where he squares off against a Broncos' run-defense who was top-notch last season, allowing the 4th-fewest fantasy points to the opposing team's running back per week. Carson is a wait-and-see type stash and is not a player I'd consider a must-start this week.

Sterling Shepard should see his fair share of good matchups in 2018, however Week 1 is one to shy away from. The Jaguars come to town to begin the season and while OBJ is elite and the matchup may not matter (much like Hopkins did last year in Week 15), Shepard will have a tough time against either Ramsey or Bouye on the outside.

Much like his quarterback entering the season, George Kittle faces off against a Vikings defense that has been outstanding against opposing tight ends. Last season tight ends scored an average of 9.0 fantasy points, and only 3 total touchdowns were allowed to the position.

To begin the season, not only are the Bills throwing out Nathan Interception Peterman at quarterback, they also play a tough Ravens team on the road. Combine the two, and the Bills have the lowest set team total at 16.75. This one is expected to be a low-scoring game and Steven Hauschka shouldn't be considered at kicker this week.

The Kansas City Chiefs first-string defense got torched by the Chicago Bears second-string unit during the preseason this year and with the departure of cornerback Marcus Peters, this may be a defense that owners are targeting on a weekly basis. Be wary to start them this week as they go up against a Los Angeles Chargers team who, many have as contenders to not only win the division but to also make it far in the postseason.