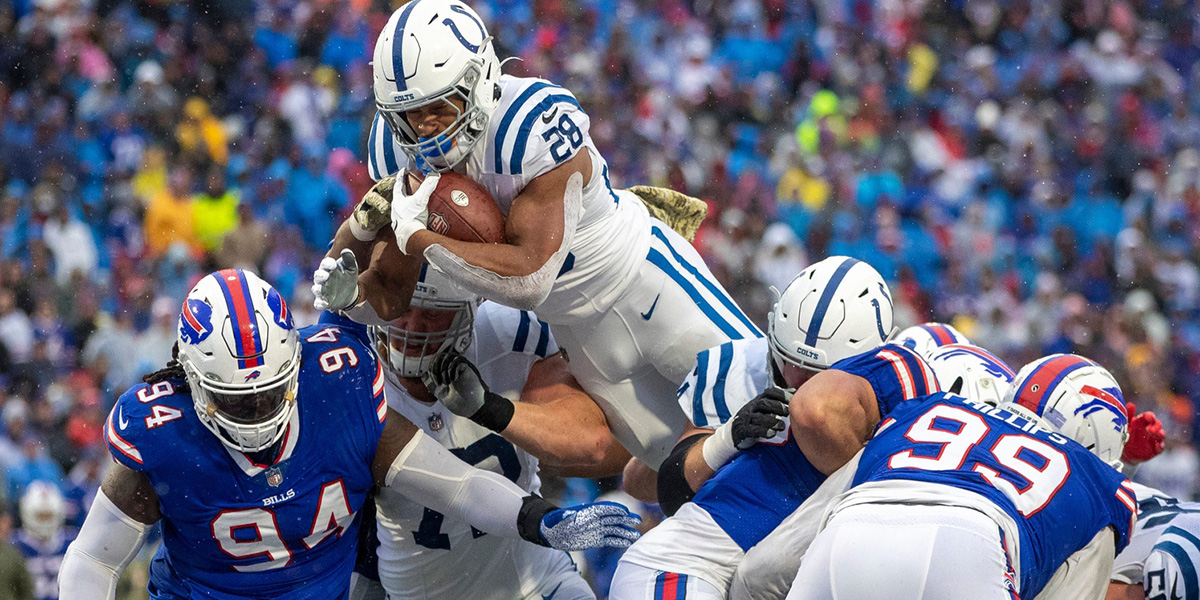 It's not easy to just draft a couple of great RBs and then plug them in every week. You need to draft many running backs, scour the waiver wire, watch for injuries and play the matchups.

And with most leagues requiring you to start two, three or even four running backs, it means that you have to be smart and dig deep at the position.

To help you out, I put together this summary of our top 10 ranked running backs for week 2.

You can also check out our full list of RB rankings or use our free who should I start tool for an interactive way to use our fantasy football rankings.

Last week, Jonathan Taylor faced the Texans. He ran for 31 carries, 161 yards and 1 touchdown. He is playing against the Jacksonville Jaguars this week. We're projecting him for 21.0 carries, 102.9 yards and 1.0 touchdowns.

Christian McCaffrey ran for 10 carries, 33 yards and 1 touchdown versus the Cleveland Browns last week. He faces the Giants this week. Our system projects him for 16.5 carries, 66.6 yards and 0.5 touchdowns.

Austin Ekeler played against the Las Vegas Raiders last week. He ran for 14 carries, 36 yards and zero touchdowns. He faces the Chiefs this week. Ekeler is projected for 14.2 carries, 63.0 yards and 0.5 touchdowns.

Leonard Fournette faces the Indianapolis Colts this week. We're projecting him for 15.2 carries, 69.9 yards and 0.6 touchdowns. Fournette ran for 21 carries, 127 yards and zero touchdowns versus the Washington Redskins last week.

Against the Bengals last week, Najee Harris ran for 10 carries, 23 yards and zero touchdowns. He is playing against the New England Patriots this week. Our system projects him for 15.4 carries, 61.5 yards and 0.5 touchdowns.

Aaron Jones played against the Minnesota Vikings last week. He ran for 5 carries, 49 yards and zero touchdowns. He is up against the Bears this week. Jones is projected for 11.4 carries, 56.0 yards and 0.4 touchdowns.

Derrick Henry faces the Buffalo Bills this week. Our system projects him for 22.0 carries, 93.0 yards and 0.7 touchdowns. Henry ran for 21 carries, 82 yards and zero touchdowns versus the New York Giants last week.